The Wrights found the trap door out of this unhappy method. Instead of designing and building whole craft, the two brothers constantly found ways to test individual components and subsystems of their designs. Early on, Wilbur realized that a plane could be controlled on its lateral axis (one wing tips up while the other tips down) if the wings of a plane were twisted, turning the craft into "an animated windmill." Instead of building an airplane with this design, the two brothers fashioned a 5-foot biplane kite. By flying the kite in the breeze, the two brothers were able to show that twisting the wings had the intended effect in causing the kite to roll.

The identification of an effective method of lateral control is universally recognized as being one of the most important contributions the Wrights made to aviation, and was the idea protected by their patent issued May 22, 1906. Thus, it may be somewhat surprising to learn that when the brothers tested their first glider in 1900, in Kitty Hawk, N.C., the controls for twisting the wings were tied off, preventing any testing of this important breakthrough. In 1900, the Wrights were not concerned with lateral control. They knew they had already solved the problem given their experience with the small kite. To fly, their craft had to generate sufficient lift, and this was the issue they were exploring in 1900. As Figure 3 shows, the Wrights often tested the 1900 glider as a kite, attempting to determine the amount of lift generated by the wings. 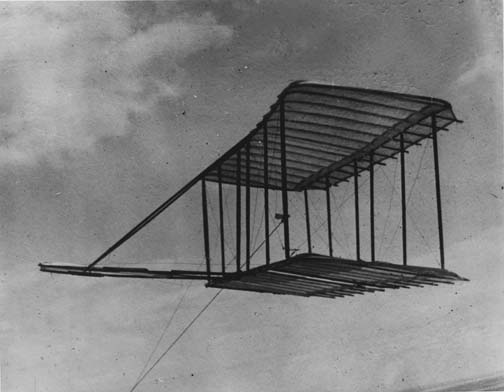 The 1900 glider did not produce as much lift as the Wrights predicted, on the basis of Lilienthal's tables, that it would. Unfortunately, they had designed the craft to be 18 feet wide, but were only able to find 16 foot spars at Norfolk, Virginia, on their way to Kitty Hawk, so they were unsure about whether the problem was the original design, or because they had to substitute shorter spars than their design called for. The two brothers built a new glider in 1901, this time obtaining the long spars in advance of their journey. The two brothers also realized they could not rely on the Kitty Hawk weather station for accurate statistics about wind velocity at their site, and so brought along an anemometer, so they could measure wind speed and the angle of attack of their craft, and obtain a reasonably- accurate estimate of the lift of the airplane. 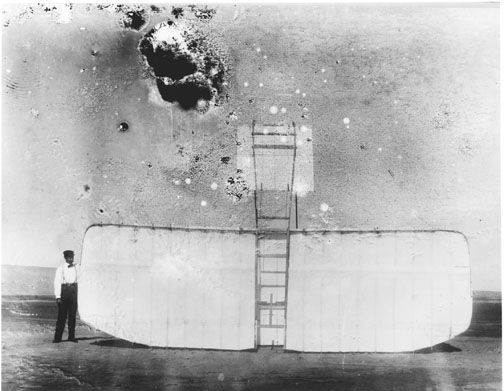 Orville stands aside the upended 1901 glider.

The 1901 glider conclusively demonstrated the lift of the airplane was not as great as the formula predicted. The two brothers realized they could not continue to build expensive gliders and convey them to Kitty Hawk for testing. Once again, they found a way to test a piece of the craft: they developed a state-of-the-art wind tunnel. Unlike previous wind tunnels, the Wrights created instruments that quantified the lift and drag of wing segments. They tested between 80 and 200 different wing shapes in their wind tunnel. In the process, they discovered the coefficient of lift (known as "Smeaton's coefficient") that was commonly accepted was wrong, and they also identified a highly-efficient wing shape in their tunnel.

This knowledge allowed the brothers to create the first effective heavier-than-air craft, the 1902 glider. Although the longest flight the glider was ever to make covered only 662 feet on the ground, it was flying into a stiff wind, and so was flying a much greater distance through the air. Had the brothers taken the trouble to launch their craft from a high cliff, or from a hot-air balloon, or tow it from an automobile or boat, the magnitude of their accomplishment in 1902 would be better understood. 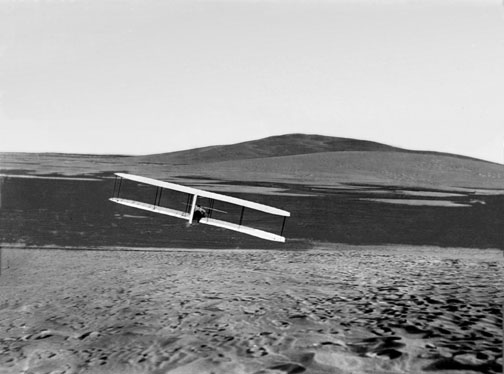 At this point, the Wrights only needed to add a system of thrust to make a powered airplane. They developed a wonderful 4-cylinder gasoline engine, returned to the wind tunnel to test propeller shapes, and designed their 1903 craft. By the time they took the craft to Kitty Hawk, the two brothers knew it could fly. They had tested the horsepower of the engine, the thrust of the propellers, and knew their wings would provide sufficient lift. There was no guesswork in the 1903 trials -- just a confirmation of something the Wrights already knew: They had built an effective airplane. 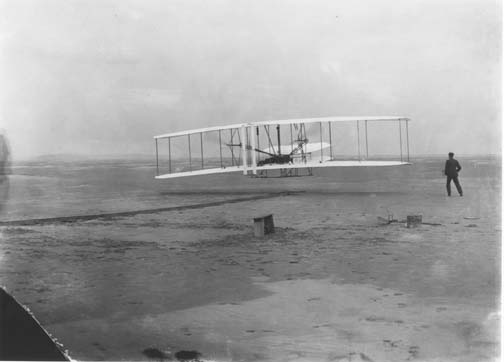 Next: The Dark, Unhappy Ending