Starting at the Top

The Wrights began their efforts to invent the airplane by carefully studying what others had done before. They read everything they could get their hands on, including Octave Chanute's Progress in Flying Machines, the 1895, 1896, and 1897 volumes of the Aeronautical Annual, and popular articles in newspapers and magazines. It seems obvious to begin with a systematic study of past efforts, especially trying to understand the failures and limitations of previous work. Still, many never bothered to put in the effort; by ignoring the lessons of the past, they frequently suffered greatly. The Wrights took the time to do their homework. The brothers exhibited an unusual ability to judge the worth of ideas they read, discarding as useless some widely-held superstitions in the field, identifying the hard facts, and carefully integrating bits and fragments of knowledge scattered through the literature. 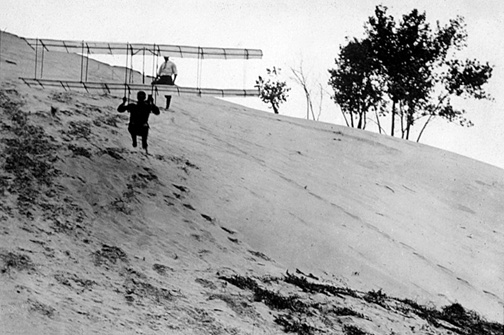 The Wrights followed the example set by Lilienthal and continued by Chanute of beginning with the glider. Only after they solved the problems of gliding flight did they feel it worthwhile to tackle the more difficult challenge of building a powered airplane. This decision was doubtless influenced by Chanute's arguments in Progress in Flying Machines, but Lilienthal and others also advocated the same approach. The Wrights also chose to pattern their aircraft after the Chanute-Herring biplane, a sturdy and relatively successful biplane glider. Lilienthal's data on the lift of wing surfaces were used in their design of the 1900 and 1901 gliders.

By careful study, the Wrights identified the best features of past aircraft and employed aeronautical theory about the lift of wings to design their first craft. Although it did not perform as expected, it was among the best gliders that had ever been built.

Next: The Design and Test Strategy of Invention